Right when we decided that we will visit Rome, I immediately searched for the Pope’s schedule. I was sad that the Pope didn’t have any parade scheduled for the whole month of July but I was really glad that he held Angelus prayers on every Sunday of the month. And so I scheduled our visit to Vatican on a Sunday to be in the presence of the Pope. Security was very tight when we entered Vatican. Police searched our bags and we went through a metal detector. There were a few items which were not allowed inside Vatican. There was one Korean girl whose aluminum tumbler was confiscated because it wasn’t allowed inside. She actually tried to escape with her tumbler when the police weren’t looking but the police got a hold of her and made her exit Vatican.

We arrived around around thirty minutes before the Pope was scheduled to hold the Angelus. It gave us enough time to go through security and find a spot. It was a very hot day and there were a lot of people! Good thing we were standing next to the fountain. Its mist somewhat refreshed us and helped us battle the scorching heat of the sun.

So if ever you’re in Vatican on a hot day, stand near this fountain to feel refreshed! lol

The pope went out at exactly 12 noon and went on with the Angelus. He looked so tiny up there. We didn’t understand a thing because he was speaking in Italian (I think) but just being in there was such a blessing. I could not describe it in words but I just cried and cried and cried. I felt like I was so so lucky to be there. There are billions of Christians in the world and I was there, in the presence of the Pope. We greatly enjoyed our time with the Pope. He greeted groups from different countries who were there and people just waved and cheered for their countries when the Pope acknowledged them. It was a great experience. It was definitely one for the books! 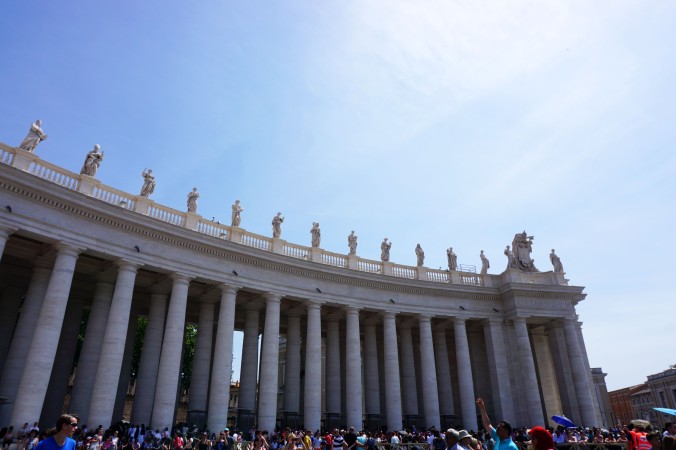 After the Angelus, we lined up to go inside St. Peter’s Basilica. It has been said that this the site where St. Peter was buried. We had to go through a long line to go inside but what’s inside is so worth it. 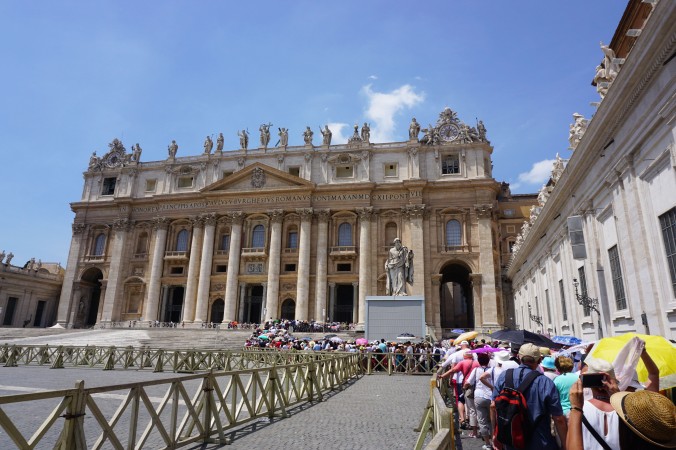 Apparently, St. Peter’s Basilica has a dresscode and I was only wearing shorts and a sleeveless top. Thankfully, my vest saved the day! lol I buttoned my vest and turned it into a dress and they just let me in. lol We did a little shopping at the shop inside the Basilica. They had a lot of pretty rosaries. Their prices are a bit high than the stores outside St. Peter’s Basilica though. So if you’re shopping for pasalubong, just buy from the stores near or those just outside Vatican. Posting this because I look tall in this photo. 😉 We got quite hungry after visiting Vatican so we just ate at this restaurant that we passed by who served carbonara. Their carbonara was really bland so my Filipino self was not impressed. We Filipinos love a lot of flavor in our food so I just added a lot of salt and pepper to add some flavor to it.

After lunch, we took the bus to Piazza di Spagna from there. The bus was that we were in was so full that we weren’t sure how to pay for the bus. Payments should be paid at the front of the bus but we entered at the back door so we just got to ride the bus for free. lol 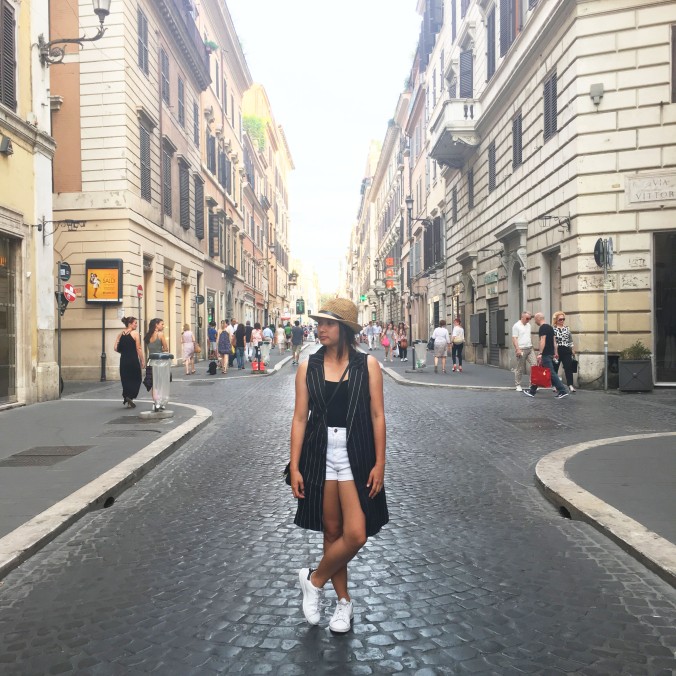 I just thought about Jollibee chicken joy with extra gravy in this photo. Lol We got a little homesick after being out of the country for so long, staying in hotels and not being able to eat Filipino food. We had two days left in Europe but despite all the cool experiences and seeing all the amazing sights, home is still where we long to be.