We started our third day in Taiwan with a trip to Jiufen Old Street. We woke up a little late, tired from all the hustlin we did at the Raohe Night Market the night before. 😉

Google maps directed us to board the 1062 bus at Songshan Station but I read somewhere that it would already be full when the bus gets to Songshan (and it really was). So we boarded the 1062 bus at the Liu Gong Zun Park bus stop. It’s at Fuxing South Road and there was already a line when we got there. The bus was empty when it arrived. There are also a lot of taxis that would offer to bring you to Jiufen. This would really benefit groups because they can divide the costs. A van driver offered to bring us to Jiufen for TWD 200 but we declined.

After traveling for about an hour on the bus and after going through a lot of zig-zaggy roads, we finally arrived at Jiufen. We expected that there would be a lot of people there because it was a Sunday. Jiufen definitely exceeded our expectations because there were a gazillion people there. 😉 We felt like we didn’t have our own personal space. lol

There were a lot of food stalls there. We got confused about where we wanted to eat because there a lot of choices so we just ate those either with long lines or if the food looks good. lol

The Peanut Roll (TWD 40) is one of my favorites. It’s made up of ice cream and bits from peanut brittle wrapped in what looks like a lumpia wrapper. 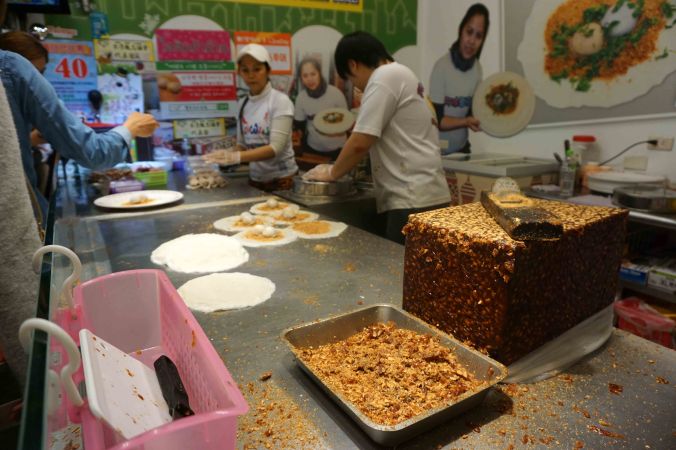 We literally just took photos of all the food that we can see. lol 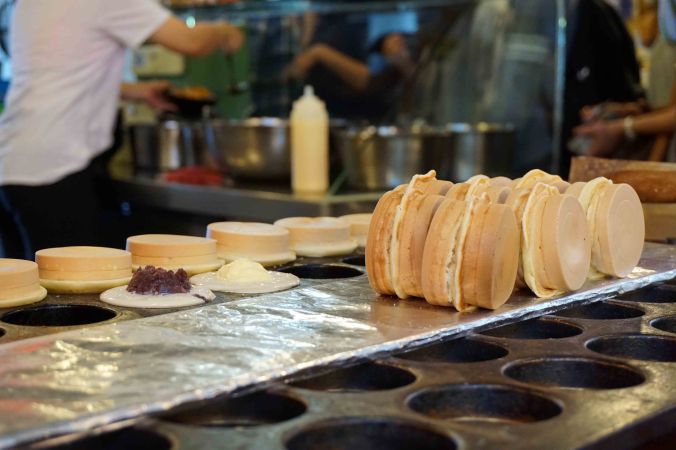 We didn’t get to try Escargot (TWD 100) in Paris so we had to try it this time. It was actually yummy at first but we actually ended up not liking it when we ate a part of it that was a little too slimy. lol 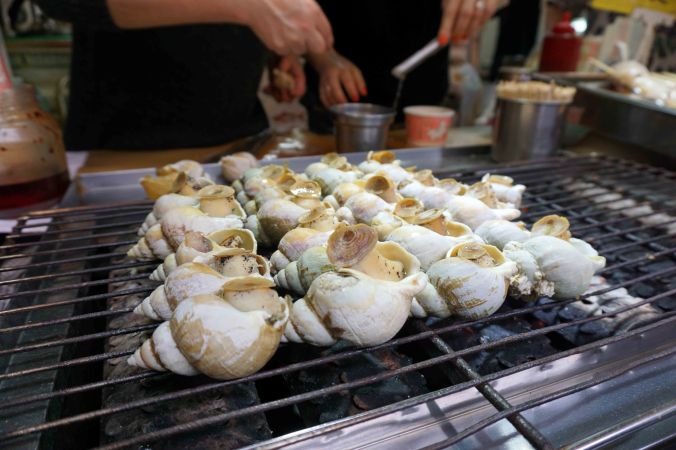 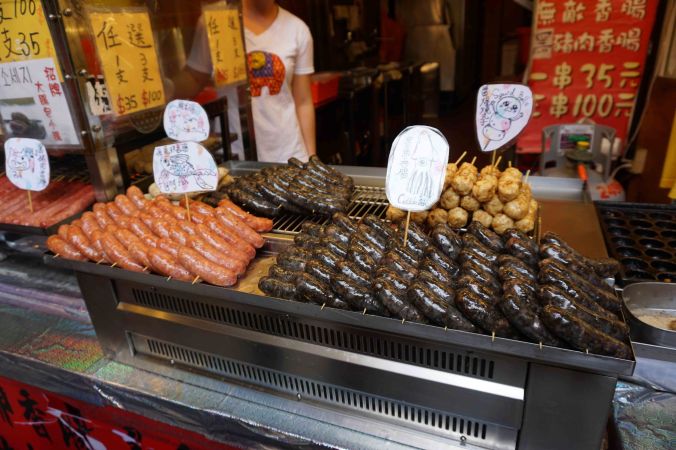 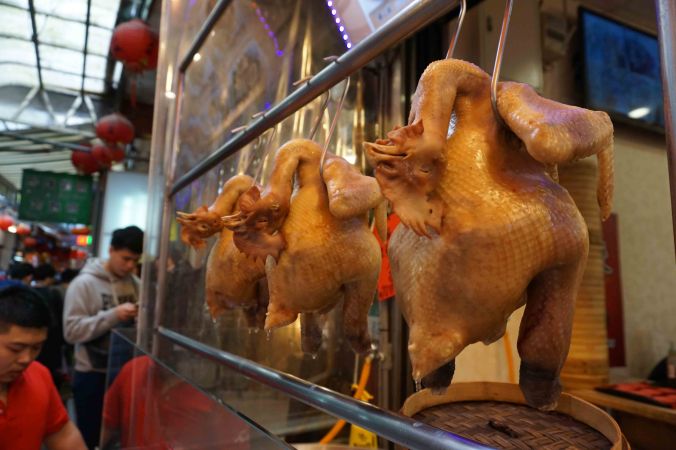 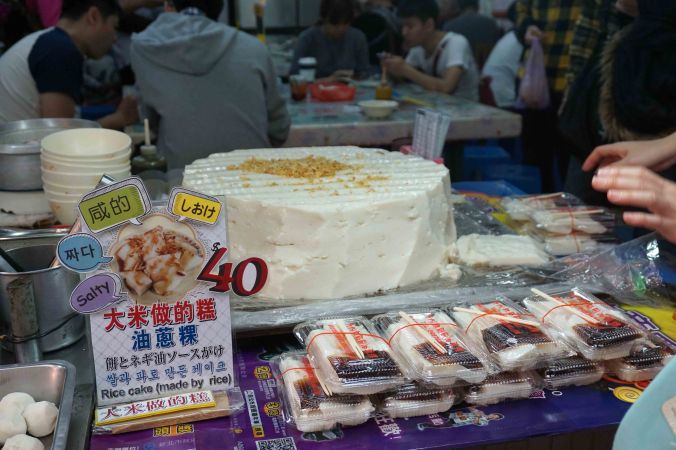 We found this restaurant serving Xiao Long Bao (TWD 120) so we just went there to have late lunch. I already tried xlb at Din Tai Fung but it was my boyfriend’s first time to eat xlb. I had to brief him about the hot soup that bursts out of your mouth after biting the xlb. lol 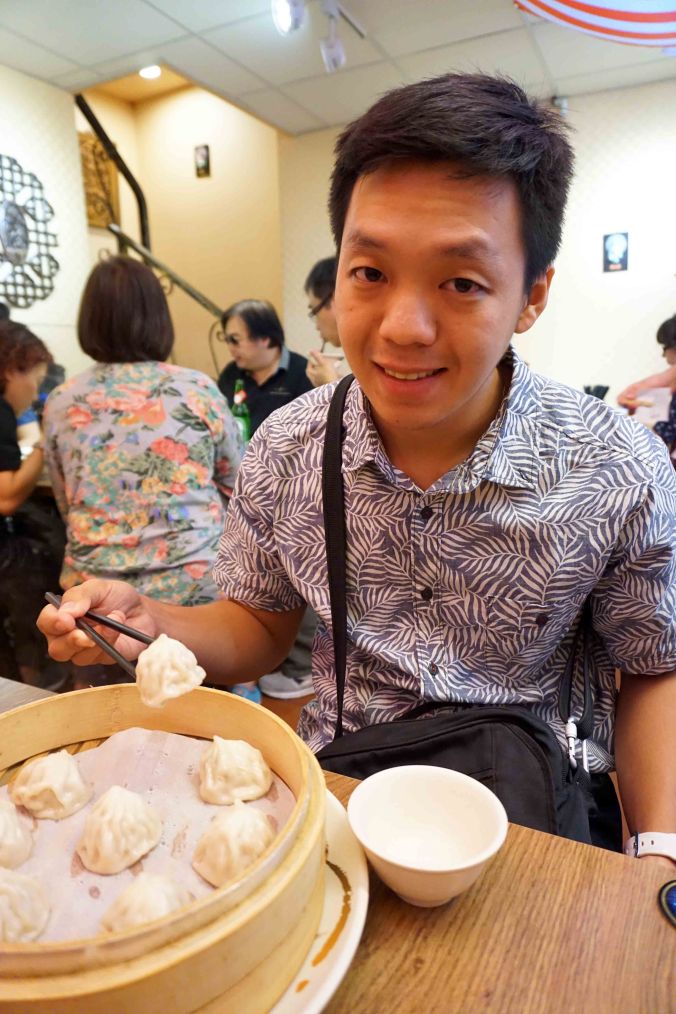 After lunch, we headed straight to the top to see this view. ❤ 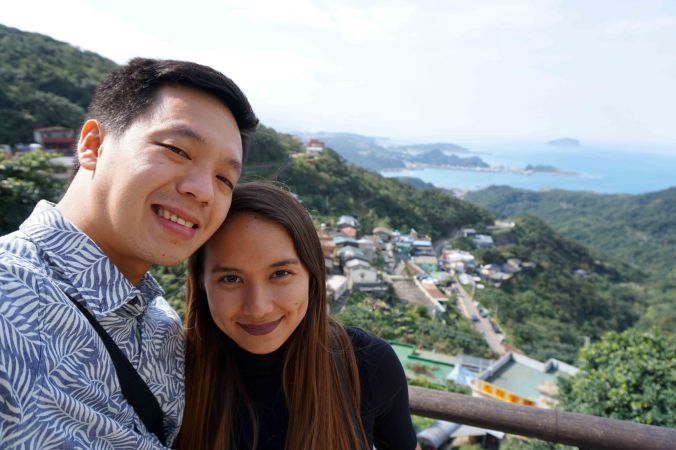 While we were on our way up, we passed by this Milk Tea Place that was founded by the inventor of Taiwanese Pearl Milk Tea. It’s definitely a must try! 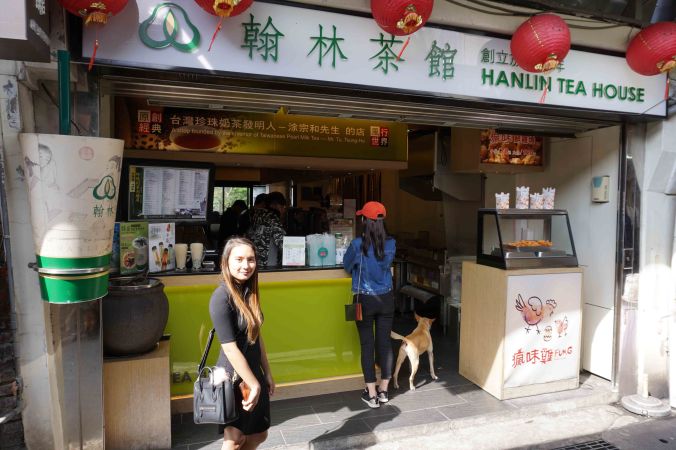 The many faced god… 😉 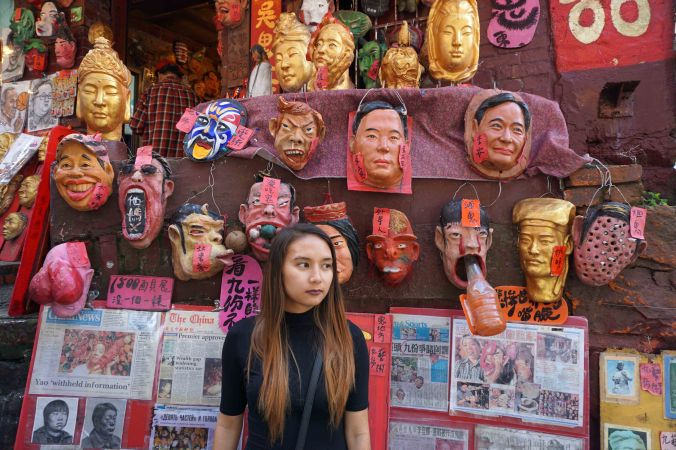 Went looking for the restroom and found this temple beside the restroom. Not sure what temple this is though.

On our way down, we passed by this stall with a super long line. They were selling Taro Balls and a lot of people were just obsessed with them. We saw people eating Taro Balls on the stairs, near the restroom, and just about everywhere.

We went to the other stall selling Taro Balls since they had a shorter line and we got curious. For me, it was an enjoyable snack to eat because of the jelly-like texture of the taro balls. But the taste was okay. I still prefer binignit over this. lol 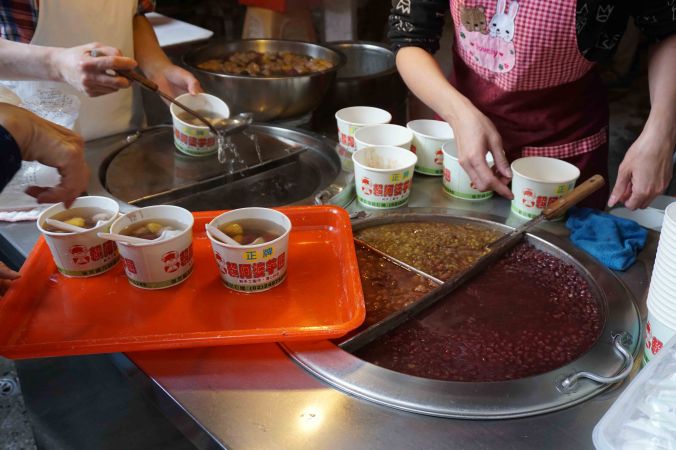 After going through all of Jiufen Old Stret, we rode the bus to Ruifang Station (TWD 15) where we took another train ride to Shifen Station (TWD 20). 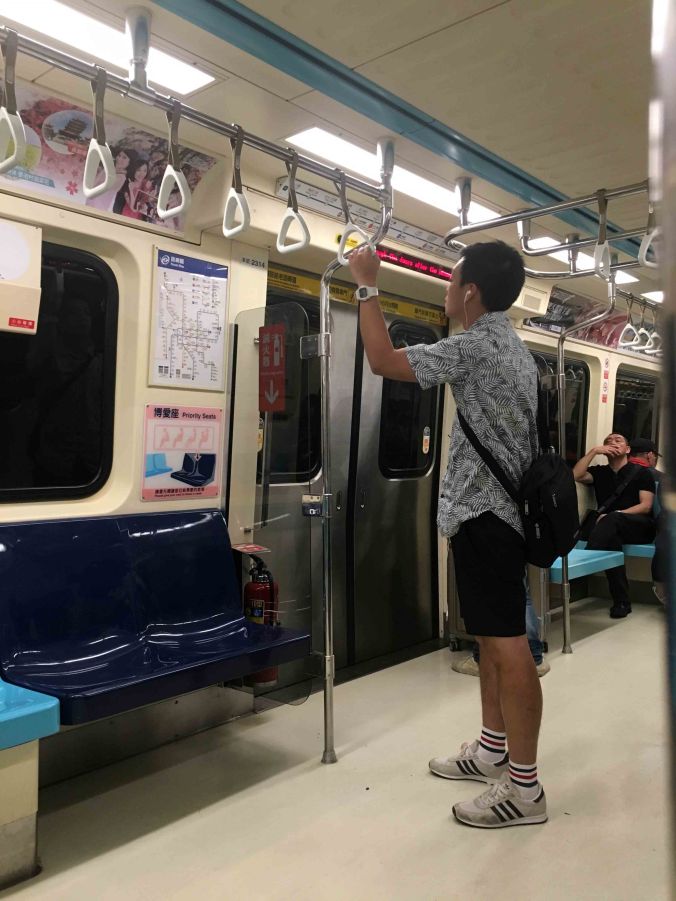 Right when we got out of the train at Shifen Station, we saw this stall selling these super yummy looking chicken. 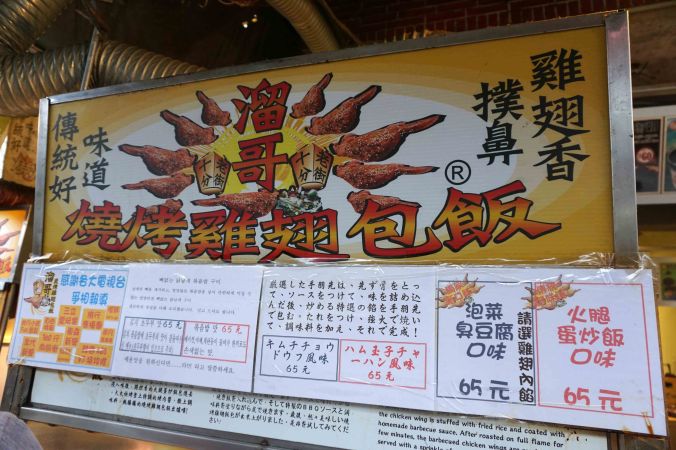 They are actually chicken stuffed with rice inside and they are absolutely to die for. It took us some time to finish them though because the rice inside was super hot.

Me at the Jing’andiao Bridge. 😀

This is where the trains actually pass by. 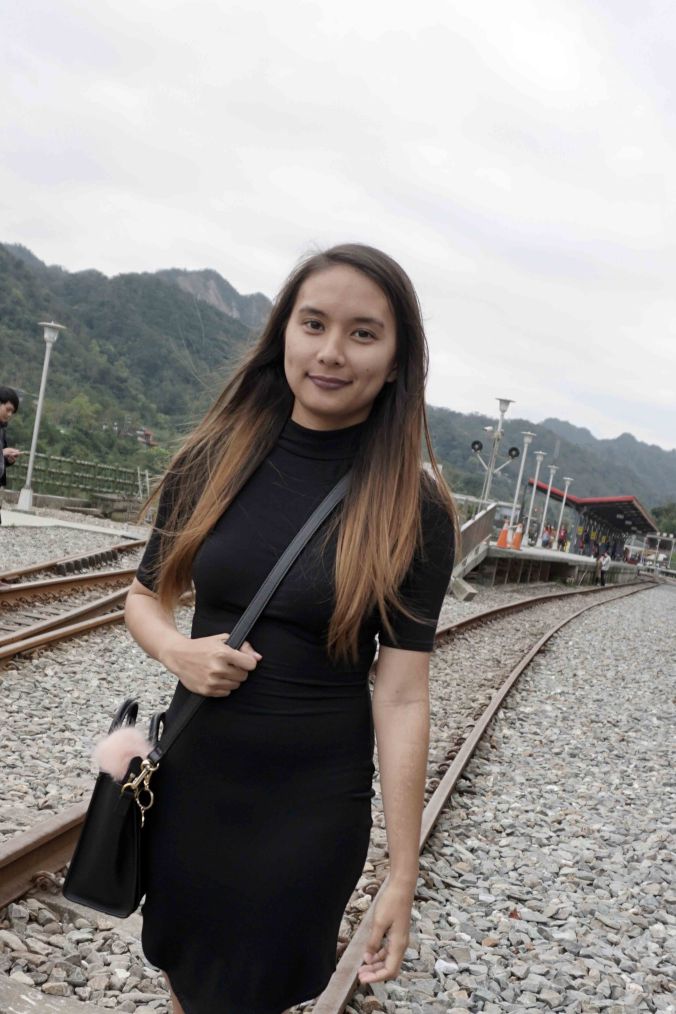 And right before we were about to buy our lantern, we witnessed a horrible accident. One of the lanterns didn’t make its way up and instead got stuck on one of the electricity wires. I really thought that it would start a fire but good thing it didn’t.

We were given this menu of the lantern colors. There sell one-colored lanterns for TWD 150 and multi-colored ones for TWD 200.

This is where we painted our lanterns, just beside the railway. 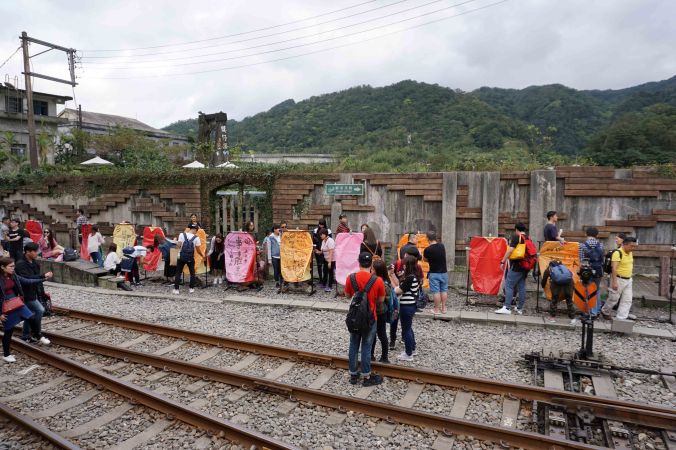 And these are people lining up to release their lanterns and have their photos taken of course. 😉

And here’s Vim, trying to fill our lanterns with his wishes. lol

And then there’s me and my lovely handwriting. 😉

We just wrote some random stuff to fill our lantern. lol Here we are, before we released our lantern to the sky. ❤ Still crossing our fingers that all our wishes will come true. 😉 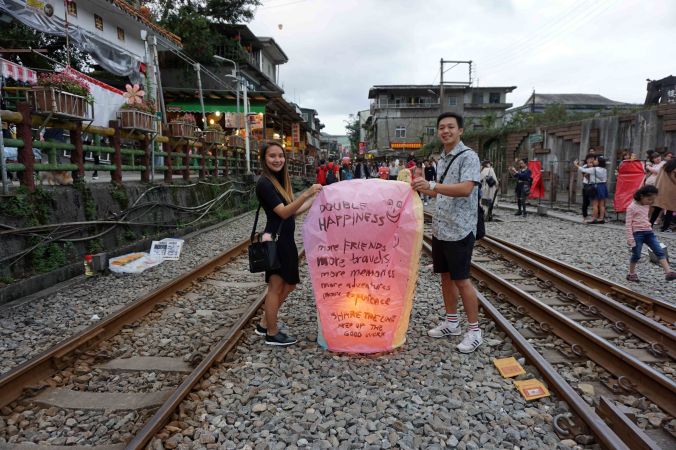 We went back to Taipei after a super long day. We dropped by Raohe Night Market to eat dinner and then we went straight to Ximending. Our airbnb apt was at Ximending so we just took this short timelapse video at the center of Ximending before we called it a night.