We visited Hongdae on our third day in Seoul. We wanted to eat a lot of street food and dessert so we just had light lunch at Choigozip Korean BBQ Hongdae. It’s located just outside of the exit of the train station.

MENU. I purposely did not take photos of their menu because I found their menu on their YT channel which is here below. We were there during lunch but their lunch specials were only available from Monday to Friday. I love how they have an English menu which is very helpful for tourists like us. If I remember it correctly, we ordered:
1 Marinated Grilled Skirt Meat (Pork)
1 Cup of Rice
1 Steamed Egg
1 Can of Soda (because they have a minimum order of KRW 22,000 per table)
https://youtu.be/Oq6VYqKvpvk

FOOD. We only got to try one kind of meat from their menu but it was quite good. I think I can eat the same quality of meat at Kaya here in Cebu but that’s just me. Their meat was also tender so it was definitely a plus. They provided a few side dishes which include some lettuce, cheese, kimchi, some shredded cabbage (i think) and a few more. 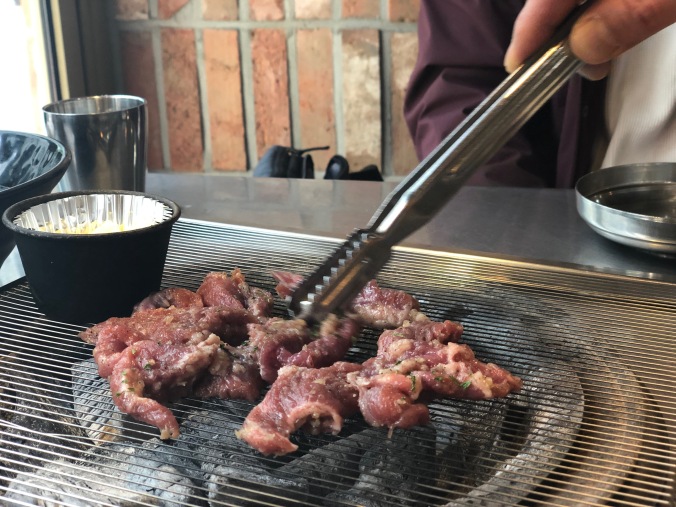 TOTAL BILL. I don’t have a photo of our bill but I’m sure we paid KRW 22,000 (~PHP 960) in total for our whole meal. It would’ve been much higher if we ordered at least two servings of their meat but again we wanted to eat a lot of street food that afternoon so we didn’t order that much.

Would I recommend this place? If you’re in Hongdae, yes! I haven’t been to a lot of Korean BBQ places in Seoul but compared to Kaya (here in Cebu), Choigozip’s meat was okay. They are also a tourist friendly restaurant because they have an English Menu. It’s very hard to communicate and to order at a restaurant that doesn’t have an English Menu so if you’re a tourist, you won’t have a hard time ordering here.